Home About A Brief History of Crayke

History of the Durham Ox (the beast)

Pictures of the Durham Ox are said to have been the most frequently reproduced images of any livestock animal in British history. In its life, from 1796 to 1807, this ox was a model for the Shorthorn breed at the time of its improvement. The Ox was eventually acquired by a Mr. John Day, a travelling showman of Harmeston near Lincoln, in May 1801. 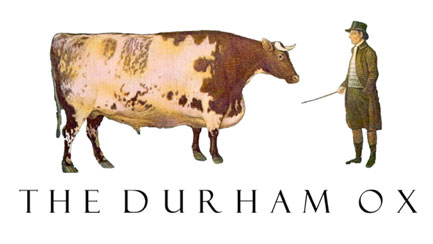 He exhibited the beast throughout the country until its demise in 1807 and was largely responsible for its fame. During its prime it was painted by several renowned artists including Thomas Weaver 1774-1843 and John Boultbee 1753 –1812. The picture hanging in the bar is a coloured engraving by I.Whessel of the original Boultbee painting of 1802. Some two thousand copies of this engraving were sold to the public by Day in 1802. This copy was obsequiously dedicated to Lord Somerville by Day. The inscription reads: - “ to the Right Honourable Lord Somerville, the print with great respect, humbly dedicated by his Lordships obedient humble servant, John Day.”

The breeders of the Durham Ox and pioneers of the modern Shorthorn breed were two brothers, Robert and Charles Colling, who farmed at Ketton Farm on the River Skerne near Barmpton just to the north of Darlington in County Durham. In 1784 Charles Colling had been a student of the renowned Robert Bakewell of Dishley near Loughborough, Leicestershire. Bakewell (1725-1795) is generally credited with the introduction of systematic livestock breeding. Prior to his work the animals that fattened easily were slaughtered and the poorer ones retained for breeding. Bakewell began to demonstrate that the performance of breeds could be dramatically and permanently improved by carefully selecting breeding stock and controlled inbreeding.1

The original cattle of this area were long horned blacks that were big and lean, more suited to the plough than the butcher, but by the 1750’s imported Dutch Shorthorns had become popular and were fetching high prices. In the Vale of York and the valley of the Tees these were known as Teeswater Shorthorns, while the paler or pied Shorthorns to the south were called Holderness cattle.

Shortly after his return from working under Robert Bakewell in 1784, Charles Colling was dining with his brother Robert and a friend who jointly wanted a bull. Previously Charles had spotted a “little roan” Teeswater Shorthorn bull near Haughton-le-Skerne church; “it had a mossy coat, looked like putting on fat and was mellow to the touch.” It belonged to a small farmer and bricklayer and Charles was duly authorized to buy it for eight guineas. But Robert did not care for it very much, and after some time, Charles who still had faith in it, bought it back at the original price. He named it “Hubback” and with the help of his wife hunted around for suitable mates eventually purchasing four cows which were named “Duchess,” “Cherry,” “Daisy,” and “Favourite” from four different farmers in the area. 2 From this small herd all our Shorthorns are descended and it became as necessary for a superior Shorthorn to claim descent from Charles Colling’s bull “Hubback” as for a racehorse to boast the blood of the Godolphin Arabian.1

Obviously with such a small herd at the outset there was much inbreeding. One of Huback’s sons sired a cow named Phoenix from Favourite. Phoenix was bred with another bull and birthed a bull named Favourite. The bull Favourite was bred back to his mother and sired a cow named Young Phoenix. Favourite was then bred with Young Phoenix (his daughter begot out of his own mother) and in 1797 produced a bull calf, which Charles had castrated. This calf grew to be known as the Ketton Ox and later as the Durham Ox. The Durham Ox was probably the most famous stock animal of all time although a bull named Comet born in 1802 from the same parents became the most sought after bull of the nineteenth century.

The immense size and weight of the Durham Ox was the product of this selective inbreeding and castration, no doubt assisted by copious amounts of fodder and little exercise. Nevertheless, this form of animal fulfilled the needs of the Industrial Revolution; meat with which to feed the workers, and fat worth 50% more than the meat, which was used for the production of the tallow used as industrial grease and in the manufacture of candles. Originally known as the Ketton Ox it was sold by the Colling brothers to a  Mr. Bulmer in 1800 for ₤140.  Bulmer had a horse drawn carriage specially built to carry the Ox and displayed it to the public around the North of England where it came to be known as the Durham Ox.

On 14th May 1801 Bulmer sold the Ox together with the carriage for ₤250 to a travelling showman, a Mr. John Day. By this time the Ox was a celebrity and it is reported that Day could have doubled his money if he had sold on that same day and by July 1801 had declined an offer of ₤2000 for the beast.3 This was an enormous price for those days being the equivalent in value of a country estate or a house in Mayfair.4

In 1802, at six years old, the Durham Ox was in his prime as can be seen in the paintings of Weaver and Bounty. Various measurements and weights have been given; the engraving of the Boultby painting in the bar records a height at the shoulder of 5ft.6in.a length from the nose to the base of the tail of 11ft. 0in and a weight in the region of 1 ¾ tons (1780 kg). By way of comparison today’s beef cattle rarely exceed a live weight of ½ ton.

Day continued to exhibit the Durham Ox, sometimes referred to as the Wonderful Ox, throughout England and Scotland for five years during which it covered over 3000 miles “exhibiting to the eyes of thousands of farmers a truer standard of shape than their ancestors had achieved and convincing them by personal interviews of the excellence of the improved breed.”1 The example was followed in many parts of the country, other breeds were similarly improved and the creation of pedigree herds became a favourite pastime of the landed gentry.

In February 1807 the Durham Ox dislocated a hip while being led out of its carriage at a show in Oxford and had to be slaughtered two months later. Day, who is reported to have made ₤97 in a single day of an exhibition of the Ox in London in 1802, determined to extract the last pound of flesh from this event, had a tent erected round the animal and charged extra to the public to witness its dying moments. He also sold pieces of hide as souvenirs.5

History of the panelling in the bar

The oak panels in the main bar are late Victorian reproductions of medieval pew ends from St. Michael’s Church in Brent Knoll, Somerset.

The story, according to the AA Book of British Villages, goes that sometime in the Middle Ages the Abbot of Glastonbury tried to seize revenues from the Parish priest, who succeeded in foiling him, and the bench ends were carved to celebrate the village’s victory. 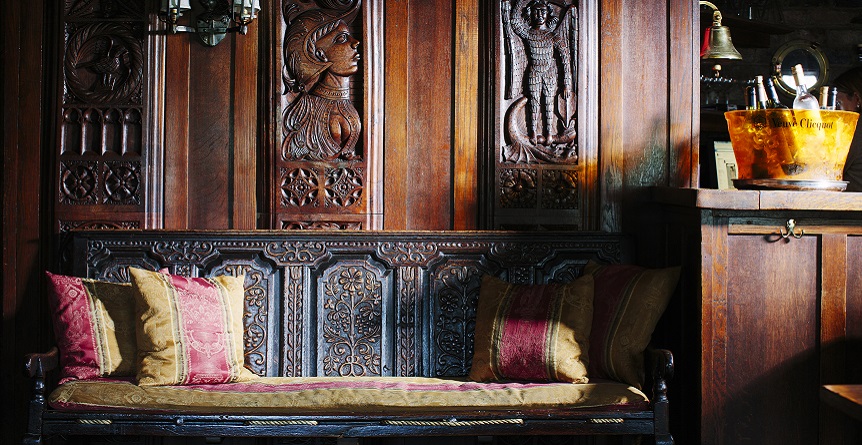 The first shows a fox dressed in the abbot’s robes rounding up a group of animals and a flock of geese; in the second, the victims are shown in revolt, stripping the abbot of his robes and putting him in the stocks; and, finally, he is hanged, with the geese pulling on the rope.  To add to the insult, the abbot’s monks are carved with pigs’ heads. (AA Book of British Villages, pg 87)

In 1908 the carpenter J Morison from Taunton was commissioned by a young Viscount to reproduce the images, using finest English Oak, for his ancestral home.  Alas, he was a little presumptuous, as the house was not left to him!

In 1974 the previous owners of the Durham Ox, Mr and Mrs Clark, asked the local woodcarver, Derek Slater, to set each carved panel into oak frames, as we see now.  Derek also built the bar, which, at the time, was the largest piece of oak he had worked with.

A Brief History of Crayke

A Roman watch tower may have been sited on Crayke hill in the 2nd Century A.D. and local excavations have produced evidence for a Roman settlement in the 4th Century.

Cuthbert, a monk and later Bishop of Lindisfarne (c. 634-687), was so greatly admired by Ecgfrid, King of Northumbria, that in 685 he gave him the vill of Creca, and all surrounding country within a circuit of three miles, to use as a resting place on his frequent journeys to York. St. Cuthbert is said to have founded a monastery here, which continued for 200 years. The monk historian Simeon of Durham wrote in c. 1100 of a party of monks from Lindisfarne, fleeing with St. Cuthbert’s bodily remains from Viking invaders, being given hospitality for 4 months in 883 by Abbot Geve at the Crayke monastery. At that time Crayke was hidden deep in the ancient forest of Galtres, reported to be so dense that a squirrel could make its way from the foot of Crayke hill to the York City wall without leaving the trees. 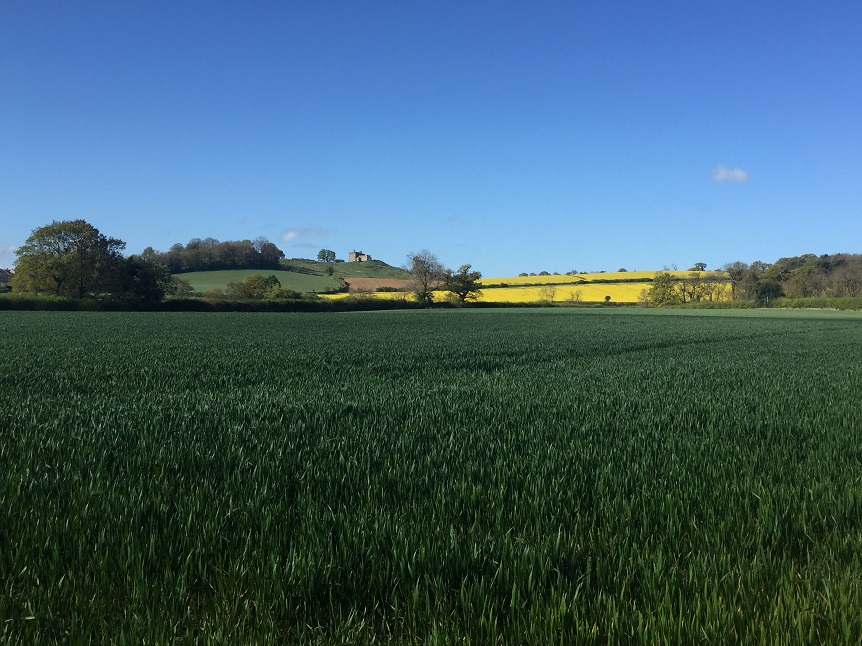 Excavations have revealed evidence suggesting Viking destruction of a pre-Norman church in Crayke, and a Danish earl named Ihured controlled the village in 990. However, by the time of Domesday, 1086, it had reverted to the Saxon Bishops of Durham. Legends of the Danish occupation abound, one of the most colourful of which involves the Scandinavian King Ragnar Lodbrog who, when taken in battle by the Saxon King Ella of Northumbria, was put to death most cruelly by being suspended in a snake pit in the dungeons of the old castle at Crayke. The foundation of Crayke castle is of uncertain date, though some antiquarians assign it to the 12th century. The present structure formed the ‘great chamber’ of an earlier, larger Norman castle, and was built in the 15th Century. King Edward III is reported to have lodged at Crayke Castle in 1345, and King John (in 1209, 1210 and 1211), Henry III (1227), Edward I (1292) and Edward II (1316) all stayed here. The Bishops of Durham maintained a deer park around the castle up to the time of King James I (1603-1625), but by the early 16th century the castle had largely fallen into a state of ruin, only the newer parts remaining standing. The finding of cannon balls in a nearby field provide a clue that the castle may have featured in the civil war. The old castle was ordered by Parliament to be destroyed in 1646, and the Manor of Crayke was sold by Parliament in 1648 to William Allanson (Lord Mayor of York, 1633).

The subsequently restored great chamber reverted with the Manor to the Bishop Princess of Durham c. 1667, and was sold finally to private ownership in 1827.

The present Crayke Church has been dated to 1490, and the registers commence in 1558.  A new north aisle was added and the roof rebuilt in 1863.  The living was a rich one, worth £900 to the rector in 1850.  William Ralph Inge, son of the curate, who became a distinguished and scholarly Dean of St. Paul’s Cathedral, was born in Crayke cottage in 1860.  Typical Sunday Church attendance at that time was 300.

Because of its association with the Bishops, Crayke remained part of the county of Durham as late as 1844.  The local inhabitants’ claim for exemption from North Riding taxes then was finally defeated in court, so that we now have only this hostelry – THE DURHAM OX – to ease our burden and remind us of the past.

Whether you want a room for the evening, a bite to eat, or to share The Durham Ox experience with someone special, we have got something for you.

BOOK YOUR STAY
BOOK YOUR TABLE
BUY A GIFT VOUCHER